Needle-free injectors, also known as air or pneumatic injectors, have been around for a surprisingly long time. They use the pressure generated by spring force, a compressed gas canister, piezoelectric motors or laser-induced cavitation (if we’re getting fancy) to drive a narrow stream of vaporized medicine under the skin and into the fat, muscle and flesh beneath. The stream is roughly the same size as a 32-gauge needle, which is typical for insulin injections today — about 0.009 inch in diameter — and travels at around 600 feet per second. Modulating the diameter of the stream determines how deeply it will penetrate and how quickly it will be absorbed by the body.

“So, actually, needle-free injection disperses better than regular injection when you just deposit a single blob through a needle and syringe,” Jeremy Marston, a professor in the Department of Chemical Engineering at Texas Tech, told Texas Tech Today. “It disperses better and is absorbed slightly more slowly, so it may be preferred by some patients.”

In 2016 Marston received a $235,794 grant from Inovio Pharmaceuticals to study how these devices could be better designed. “Basically, we want to understand a little bit more about the actual mechanics of the jets,” Marston said at the time. “What we’ve noticed is there is a little bit of a spread when it hits the skin, which is undesirable, so now we’re trying to think about how to eliminate that and have a nice streamline jet going straight into the skin.”

A further advancement to the technology came the following year when an international team of researchers, led by scientists from the Wyss Institute, refined laser-cavitation techniques for use in noninvasive injections. Cavitation is a phenomenon in which rapid changes in a liquid’s pressure generates a low-pressure bubble of vapor. When the vapor bubble is subjected to higher pressures, it will collapse and generate a significant shockwave. This is actually how mantis shrimp are able to deliver such crushing claw strikes to their prey.

Laser cavitation, as the name implies, typically uses a pulsed laser to create and collapse these vapor bubbles on a very small scale. The problem with pulsed lasers, however, is that they’re big, bulky and expensive. So instead, the Wyss team leveraged a continuous wave (CW) laser — which is far less expensive and far more portable — to generate the bubbles capable of blasting vapor streams up to 850ft/s and 5mm into the skin.

Noninvasive-injection techniques were discovered in the late 19th century after factory workers accidentally imbued themselves with the contents of their high-pressure grease guns. However, it wasn’t until the 1930s that engineer Marshall Lockhart filed a patent for the first medical jet injector, and it wasn’t until 1947 that the device actually entered clinical trials.

By the 1960s the US military had adopted the technology, dubbed the Ped-O-Jet, as a mass inoculation tool for service members against typhus and smallpox. The CDC also utilized these devices to immunize the American public against polio throughout the ’60s. Jet injectors even made their way into pop culture, being featured in Star Trek sick bays as “hyposprays.” 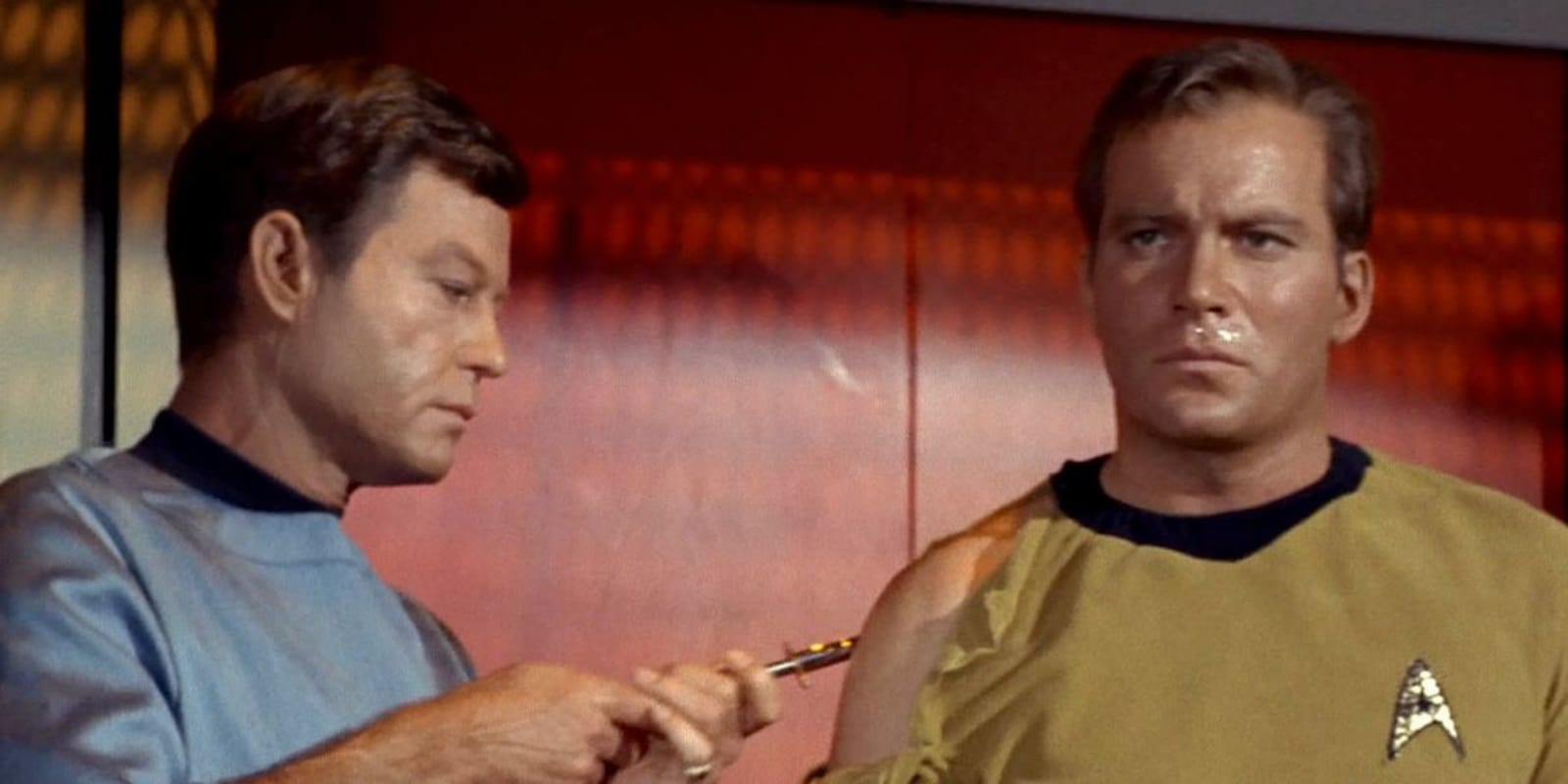 But by the late ’80s and early ’90s, the appeal of jet injectors had begun to wane. This was due to the risk of cross-contamination and infections. Jet injectors are capable of unintentionally driving contaminants, bacteria or fungi present on the surface of the skin into the underlying flesh alongside the medicine itself. There’s also a potential that whatever dermal gunk the gun picks up from one patient can be transferred to the next person in the immunization line, though later iterations have incorporated disposable single-use injector tips to help minimize that carry-over.

There may be no physical needle with which a jet injector can “stick” you, but it’s not like you don’t know what’s coming. And for folks with more-intense cases of trypanophobia, that sense of dread can be enough to dissuade them from seeking medical attention. That’s why a multi-institution team, including researchers from Stanford and MIT, has set about developing a microneedle-packed pill that can be ingested. Once it’s in your gut, it unfurls into a caltrop of medicinal macromolecules that inject themselves painlessly into the lining of your gastrointestinal (GI) tract.

The system, dubbed the self-orienting millimeter-scale applicator (SOMA), could be the next big advancement in diabetes treatment. Diabetics must prick, stick and jab themselves anywhere from two to four times per day just to keep living. And it’s not like they can swallow a pill full of insulin when they need it; the stomach’s low pH will dissolve the insulin molecules before they can reach the intestines and be absorbed. That’s where the SOMA system comes in.

The SOMA system is a pill that’s slightly smaller than a blueberry and a bit bigger than a pea. At its core are a trio of spring-loaded arms, the ends of which terminate in nests of millimeter-long posts of the drug to be delivered (i.e., insulin). This tiny contraption sits inside a sugar-glass casing and, like a Weebles toy, has ” a weight at the bottom of them that pushes their center of mass down towards their preferred configuration,” explained Dr. Alex Abramson, a postdoctoral fellow and chemical engineer at Stanford University.

Once the SOMA’s shell dissolves in the moisture of the small intestines, the device’s three arms snap open, the force of their extension driving the drug-laden “milli-posts” through the mucosa level of the GI lining, where the medicine is absorbed into the bloodstream. “We use hydration [for activation], because even though the stomach is well known for having a low pH, not all people’s stomach has the exact same pH, particularly if they’re on antacid or if they’re drinking a very basic liquid like milk,” Abramson said.

Once everything important dissolves, the remaining bits of hardware break apart and pass safely through the rest of the gut. “We performed numerous safety tests on animal and human tissue to ensure that the penetration event allowed for drug delivery without causing a full thickness perforation or any other serious adverse events,” Abramson told MIT News last year.

This technology is still quite new. Abramson hopes that human trials will begin within the next two years, which will help further refine the SOMA system’s functionality. “We want to make sure that there isn’t any change to the pharmacokinetics or pharmacodynamics of the delivery,” he said. “And we also want to make sure that there aren’t any proteins or enzymes present in the tissue that could be affecting the drug in any way.”

He also points toward the millimeter-long posts themselves as a limiting factor. Since each post is essentially the drug macromolecule compressed into a specific shape using a specialized mold, there’s a hard limit on how much medicine each pill can physically carry.

“There are some drugs that are injected that require very, very large posts,” Abramson said. “We’re working to increase the dose size past the milligram scale, but eventually we’re going to be limited by just how much we can actually load into the tissue itself.”

So don’t get too excited yet. Until the SOMA system makes its way through FDA certification, swallowing horse pills and enduring needle jabs won’t be a thing of the past for the foreseeable future.

1 Year After Losing Its Hospital, A Rural Town Is Determined To Survive

MSG is actually safe, and 5 other times we’ve gotten it wrong about food additives